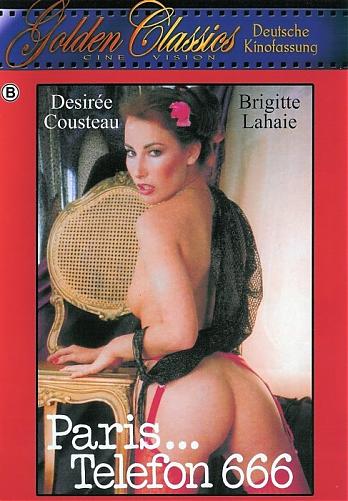 Описание:
Страна Франция
Студия Ribu Film
Режиссер: Gerard Kikoine
В ролях: Brigitte Lahaie, Cathy Stewart, France Lomay, Karine Gambier, Monique Carrere, Morgane, Samantha
Описание: The plot is difficult to work out precisely when you don't speak the language (in this case the German version, Paris Telefon 666). Brigitte and Richard live together and Brigitte seems to run a group of call girls and Richard seems to be an investigative reporter using them to get the goods on their clients, or maybe Brigitte has gathered these girls together for this purpose, as some of them seem reluctant to go the whole way. They seem as if they would like to perform the standard trick of a News of the World reporter and 'make their excuses and leave', but this is a porn film so they don't. The plan seems to be that Richard will get incriminating evidence before they have to go all the way, but something slapstick always seems to go wrong before he does.
First though we see Brigitte and Richard having sex, interrupted by the phone call which gives Richard his assignment. Then Brigitte goes to visit her girls - Karine Gambier (Ellie), Morgane (Marianne) and France Lomay (Carole).
First Morgane is picked up in a limo and driven to meet a rich female client (Monique Carr