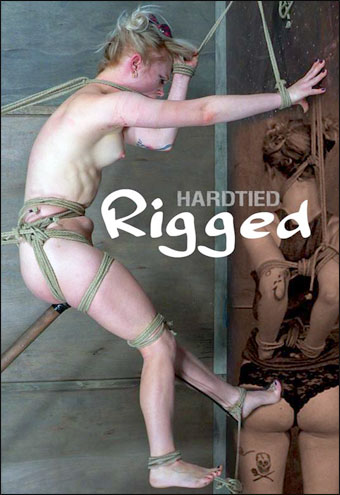 Описание:
Anna Tyler is, without question, one of the cutest girls we have had on any of our shows. She is small and sweet and with those bows on her pigtails she looks just like a little doll. The things O.T. is planning on doing to her, however, are not so nice and sweet as our model. He wants to take this well put together girl and turn her into the cum-drunk wreck she was always supposed to be, and that's just what he's going to do. After he undresses her, O.T. ties Anna up on the floor so that her tight little body is contorted into some odd shape with one leg and one arm bent and the other arm wrapped around her back. She looks like a puzzle to unfold, but that's not quite what O.T. has planned. He grabs and pulls at her perky tits and twists her nipples as she lets out tiny little whines of pain and excitement. Then he ties her neck down to her leg and pushes her back so he can reach her pussy to fuck it with the pogo for a little while before it's back to the torment. Next, Anna is tied with her hands and feet on the floor and her ass all the way up in an upside down V-shape with a rope around her waste. O.T. takes out his flogger and uses it to beat her ass and her pussy until they are sensitive enough for him to reach his final goal. He ties the pogo so that it is tilted down with the end deep in Anna's wet pussy, and then ties a hitachi between her legs pressed up against her clit. And he leaves her there, screaming in ecstasy, cumming over and over again until there is almost nothing left of her. She's been completely used up, mind, body, and soul.