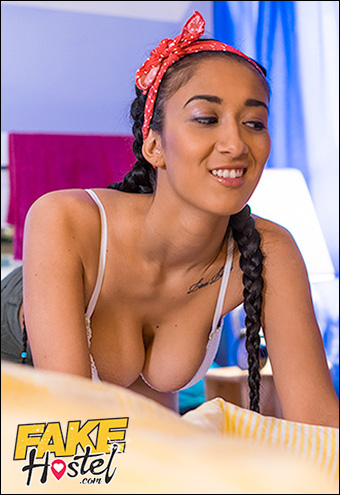 Описание:
Michael Fly is sitting on his bed in the Fake Hostel when Darcia Lee comes to doorway and finds him polishing his...shoes. Michael and Darcia make sexy eyes at each other until Michael's gaze is drawn to the hulking form of her boyfriend standing behind her! Intimidated by the beefcake, Michael does not object when his bed is taken from him and decides to get some shut-eye. In the middle of the night, Darcia creeps over into Michael's bed, takes off her shirt, and puts his hands on her big tits. Though he is nervous, Michael does not protest when she sucks his cock, nor when she shakes her big ass in his face. Trying to remain as silent as possible, Darcia and Michael fuck as hard as they can in the hopes of finishing before the boyfriend notices his girlfriend is in another man's bed!